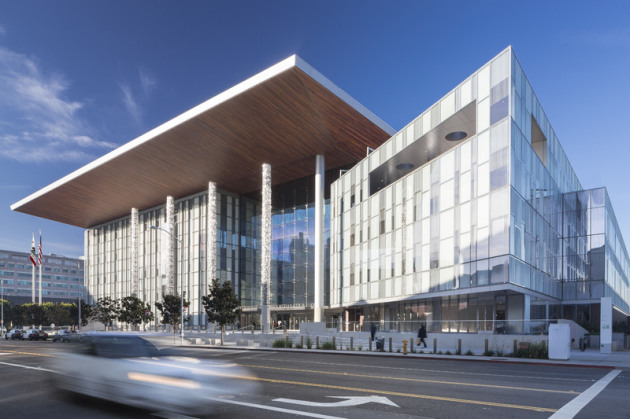 The new courthouse opened in Fall 2013 and provides space for a high volume of criminal, traffic, civil, and family judicial proceedings in the Superior Court of California, County of Los Angeles.

Encompassing two city blocks, the project includes 31 courtrooms, with accompanying holding cells, administrative office space, and secure parking. The Project also includes office space which will be used by the County of Los Angeles, additional office space to be made available to commercial tenants, and space for retail tenants.

Development Industries, Inc. is proud to be selected as the Quality Management firm during design and construction for the Renovation, Restoration and Seismic Upgrade of the landmark Hall of Justice Building.

This $243 million historical restoration and seismic upgrade, is a design-build project with AC Martin Architects as the Designer of Record and Clark Construction Group California, LP. The historic Beaux Arts building was built in 1925 and has been vacant since the 1994California, Northridge Earthquake.

The scope of work includes the restoration of the building exterior consisting of granite block and window wells. There is also an existing Loggia area on the interior with several other specific areas of historical restoration such as stairwells, a courtroom and a jury room, which will be brought back to its original finish. The structural upgrade of interior seismic shear walls and drag beams throughout the floors will serve as the seismic modifications on the exterior. There is also pinning of all the exterior granite and terracotta. Complete new MEP systems will be designed and installed including connections with the existing central plant and new electrical services. The interior will be a complete core and shell package along with tenant finish-out work.

The new tenant will be the Sherriff and the District Attorney’s office. Along with the existing building renovation, we will be constructing a new 9 story garage which will house 1,000 vehicles. This garage will be 4 stories below grade and 5 stories above. The exterior will consist of precast walls and metal panels. Post tension concrete and shear walls will create the structure.

The project schedule is estimated to be of 29 months which includes both Design and Construction and will be LEED Gold.

For more information on Development Industries, Inc. and our services, please call us toll free at 1-877-800-3452.